I welcome any and all inquiries (interviews, general press, work-related) about any of my research, teaching, fiction, music, anime/manga work etc.  I can be reached at adapalmer@uchicago.edu

Below are several short bios you can copy-paste, along with usable photos of myself.  Feel free to use the bios in their entirety, or to edit or excerpt them to fit your needs. 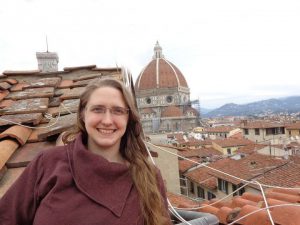 General, 200 words: Ada Palmer is a historian and science fiction novelist. She studies the history of the concept of progress, and of information technologies and their impact on censorship, books, information, and society, focusing on pre-modern Europe and the Mediterranean world. Her award-winning Terra Ignota novel series (beginning with Too Like the Lightning, from Tor Books) explores how humanity’s cultural and historical legacies might evolve in a future of borderless nations and globally commixing populations, and is a finalist for the 2022 Hugo Award for Best Series. She teaches in the University of Chicago History Department, where she recently organized a collaborative project “Censorship and Information Control from the Inquisition to the Internet” with Cory Doctorow and Adrian Johns, and the interdisciplinary educational role-playing game ExoTerra, which used a terraforming narrative to examine the relationship between the dream of space colonization and Earth’s history of destructive colonialism.  She also composes music based on mythology and science fiction, and studies anime and manga, working as a historical consultant for anime and manga publishers in the US and Japan. She writes the philosophy & travel blog ExUrbe.com, and hosts the Ex Urbe Ad Astra Podcast, co-created with novelist Jo Walton.

Ada Palmer is a historian focusing on the history of censorship and radical thought, especially the ways censorship evolves and changes during revolutions in information technology, from the print revolution to the digital. An Associate Professor in the History Department with affiliations in Classics, Gender Studies, and the Institute on the Formation of Knowledge, she works broadly on the history of science, religion, heresy, freethought, atheism, censorship, books, printing, and long-term European history, especially the Renaissance and Enlightenment. Her current research focuses on how studying the print revolution can help lawmakers and corporations make wiser choices today during the digital revolution, while her first academic book Reading Lucretius in the Renaissance (2014) explores the impact of the rediscovery of classical atomism on the development of modern science and thought. She is also a science fiction and fantasy novelist, author of the award-winning Terra Ignota series (four volumes, beginning with Too Like the Lightning, Tor Books), which explores a twenty-fifth century civilization of voluntary citizenship and borderless nations, written in the style of an eighteenth-century philosophical novel. She is a disability activist with a focus on self-care training and invisible disability, a composer of polyphonic a cappella music, studies anime and manga, works as a consultant for anime and manga publishers, blogs for Tor.com, and writes the history, philosophy and travel blog ExUrbe.com, which hosts her recent essay on the question “If the Black Death caused the Renaissance will COVID-19 cause a golden age?” and her celebrated guide to how to find good gelato anywhere in the world, once featured in The Economist.

Ada Palmer’s Terra Ignota series (beginning with Too Like the Lightning, from Tor Books) explore how humanity’s cultural and historical legacies might evolve in a future of borderless nations and globally commixing populations. Its fourth and final volume, Perhaps the Stars, came out in November 2021. Terra Ignota is a finalist for the 2022 Hugo Award for Best Series. She teaches in the University of Chicago History Department, studying the Renaissance, Enlightenment, classical reception, the history of books, publication and reading, censorship and information control, and the history of philosophy, heresy, science, atheism. She is the author of Reading Lucretius in the Renaissance (Harvard University Press). She often researches in Italy, usually in Florence or at the Vatican. She composes fantasy, SF and mythology-themed music, including the Viking mythology musical stage play Sundown: Whispers of Ragnarok (available on CD and DVD), and often performs at conventions with her vocal group Sassafrass. She also researches anime/manga, especially Osamu Tezuka, early post-WWII manga and gender in manga, and has worked as a consultant for many anime and manga publishers. She writes the philosophy & travel blog ExUrbe.com, and hosts the Ex Urbe Ad Astra Podcast, co-created with novelist Jo Walton.

Ada Palmer’s Terra Ignota series (Tor Books) explores a future of borderless nations and globally commixing populations. The first volume Too Like the Lightning was a Best Novel Hugo finalist, and won the Compton Crook Award, while Ada received the Campbell Award. Terra Ignota is a finalist for the 2022 Hugo Award for Best Series. She teaches history at the University of Chicago, studying the Renaissance, Enlightenment, heresy, atheism, and censorship. She composes music including the Viking mythology cycle Sundown: Whispers of Ragnarok, and performs with the group Sassafrass. She studies anime/manga, especially Osamu Tezuka, post-WWII manga and feminist manga, and consults for anime and manga publishers. She blogs and podcasts at ExUrbe.com. 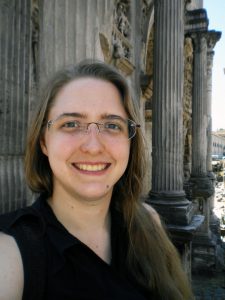 Ada Palmer is an Associate Professor in the History Department at the University of Chicago. She is a cultural and intellectual historian focusing on long-durée intellectual history and the recovery of classical thought in the Italian Renaissance. Her current research focuses on . Her published monograph, Reading Lucretius in the Renaissance, uses Renaissance manuscript and print editions of Lucretius’ Epicurean didactic epic De Rerum Natura to expose how humanist reading practices controlled the distribution of newly-rediscovered radical ancient philosophy in the fifteenth and sixteenth centuries, and how this affected the capacity of classical radicalism to influence scientific and religious thought at the dawn of the modern era. Much of her research has been conducted in rare books libraries, especially in Rome and Florence, where she worked with Renaissance copies of classical texts, both manuscripts and printed books. She has been a Fulbright scholar in Italy, a fellow at the Villa I Tatti Harvard University Center for Italian Renaissance Studies, and an ACLS fellow. Her 2012 article “Reading Lucretius in the Renaissance” won the 2013 I Tatti Prize for Best Article by a Junior Scholar and the Selma V. Forkosch prize for the best article published in the Journal of the History of Ideas.

Ada Palmer is a cultural and intellectual historian focusing on radical thought and the recovery of the classics in the Italian Renaissance. She works on the history of science, religion, heresy, freethought, atheism, censorship, books, printing, and on patronage and the networks of power and money that enabled cultural creation in early modern Europe. She teaches in the History Department at the University of Chicago, and her first book is Reading Lucretius in the Renaissance. 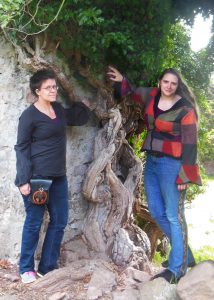 Ada Palmer is the primary composer for Sassafrass. Sassafrass began at Bryn Mawr College as a way of escaping the monotonous  pop music performed by all the other singing groups. It was inevitably drawn into filk since all the members were already fans. Ada herself had been attending cons since middle school when her father started taking her to Dr. Who conventions, but Balticon gets credit for getting her and Sassafrass into a filk circle for the first time; Sassafrass’s song, “Somebody Will”, a space-themed exploration single from Sassafrass’s Friend in the Dark album, has been nominated for Pegasus’s Best Filk Song in 2011, 2012, and 2015.   Because Ada studied a lot of music theory and especially Renaissance music, her compositions tend to be multi-part a cappella, with Renaissance, Medieval and, often, modal harmonies. Ada’s most recent project is a Viking-themed album “Sundown”, whose songs, when put together, tell the story of the creation and destruction of the Norse cosmology focusing on the murder of Baldur. Ada and Sassafrass have traditionally been most active on the East Coast, but the job market has taken Sassafrass members all over the country, so now they perform in a lot of unpredictable venues; they recently performed at Worldcon 2015 and Mythcon, and have completed a successful Kickstarter to raise funding for the upcoming Friend in the Dark. 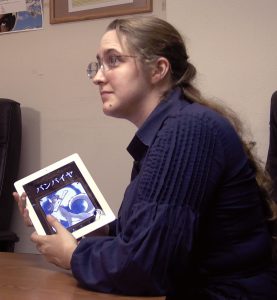 Ada Palmer is the founder of TezukaInEnglish.com, now the primary English language web resource for information about Osamu Tezuka’s life, works and international publication history.  She has worked as a consultant for Tezuka Productions and numerous American manga and anime publishers.  She blogs about anime and manga for Tor.com, and wrote a bi-weekly column on manga, cosplay, fashion and otaku culture for Tokyopop.com (2005-2007).  She has also worked as an Historical and Linguistic Consultant for FUNimation, and was a Mythology and Language Consultant for ADV Films (2005-9) and an Anime Network Field Representative (2004-6). Her work on manga has also brought her into the cosplay world, where she creates and competes, but usually runs, cosplay events. She has staffed many conventions, and for nine years has overseen cosplay events at Anime Boston, running their Masquerade and other events including her signature Cosplay Human Chess. Ada has made Anime Boston a trendsetter in the cosplay world, creating new events like the Anime Dating Game, and setting a record for the most cosplay events at any convention worldwide, with thirteen separate events and activities designed for types of costumers and cosplayers. 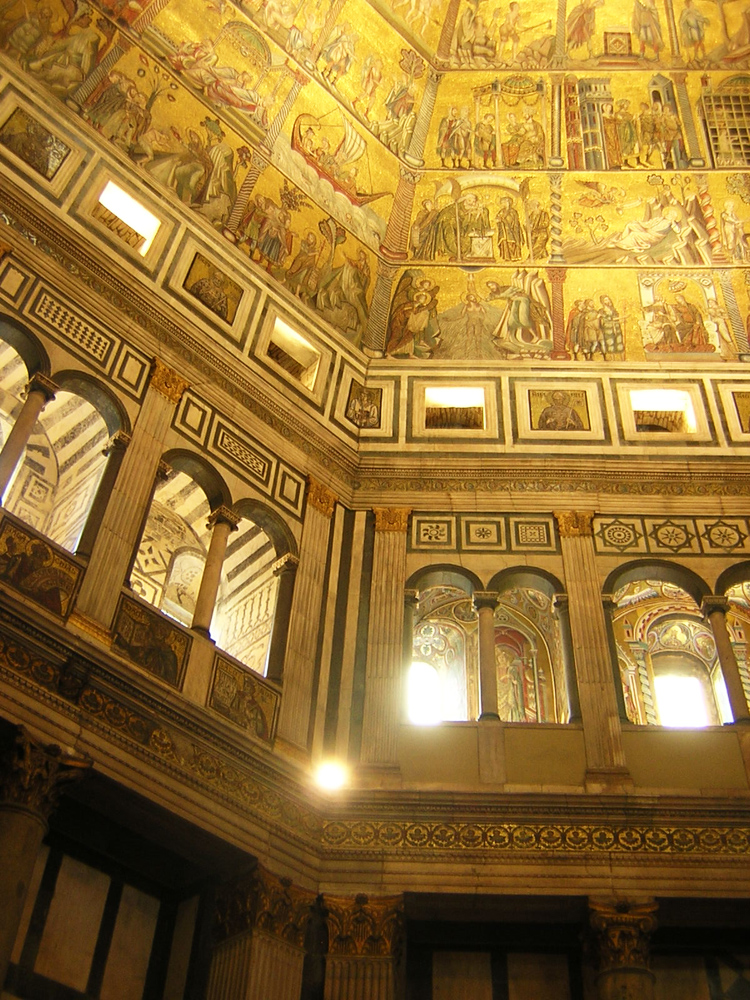